A flat head, also known as plagiocephaly can be caused by restrictions of movement in the neck, tightness of the neck muscles or compression at the base of the skull.

All of these mean that when your baby lies on its back to sleep, it will lie mostly on the same side or the same position. As the head is reasonably soft it may become flat.

What you may notice:

Plagiocephaly is distortion of the head and cranial asymmetry and is often completely an avoidable problem if diagnosed and treated early. Look out for the above signs.

What can you do to help prevent plagiocephaly?

What will an osteopath do?

The osteopath’s main aim will be to get full range of movement in the neck using muscle and fascia stretches, articulating the neck joints and using cranial techniques.

Treatment is gentle and babies are usually quite settled during treatment. With full range of neck movement, the head stops becoming flatter.

The osteopath will also give you exercise and postural advice to prevent the stiffness re-occurring.

As osteopaths who specialise in paediatrics, we often hear the following phrases from new parents:

‘He feeds really well on one side but not as well on the other.’

‘He’s always looking to one side.’

Generally, these parents have consulted an osteopath because they are:

To an osteopath who specialises in paediatrics, these observations are really important. Firstly, it can suggest that the baby’s neck is restricted, limiting movement to one side and potentially affecting the baby’s feeding mechanics, which can make breastfeeding challenging. It also suggests that home management, such as simple exercises to stimulate the baby to the opposite side and increasing ‘tummy time’, may be beneficial. In the case of head shape, early intervention is the key, for more information see our blog on head shape: https://kaneandross.wordpress.com/2013/04/04/flat-head-syndrome/

If you have noticed these things with your own baby, or find yourself saying the above phrases, contact an osteopath who specialises in obstetrics and paediatrics to discuss your questions or concerns: http://www.kaneandross.co.uk

One of the most common complaints that plague early childhood are recurrent ear infections, particularly between the ages of 3 months to 3 years old.1 As well as being extremely painful, they are often accompanied by fever, nausea, vomiting, diarrhea and hearing loss.2 Up to 20% of children will suffer from recurrent infections and the younger the child is when they have their first infection, the more likely it is to reoccur.3

Recurrent ear infections occur when the first infection in the middle ear, either viral or bacterial, isn’t completely resolved, or, put another way, hasn’t drained properly through the ear. This is more common in children for three main reasons:

The medical management of recurrent ear infections is, generally, to treat with a course of antibiotics.1 If the infections are recurrent enough to have an impact on the child’s speech and language due to sustained hearing loss, surgical interventions may be considered, commonly known as grommets.

Osteopathic management offers another avenue of treatment, which can be used independently or in conjunction with medication. As the frequent infection suggests poor ability to drain through the middle ear the osteopath with look at the child’s posture, neck movement, surrounding muscle tone and tissue restriction. By gently treating surrounding areas of restriction, the eustachian tube is free to drain the middle ear more efficiently. Treatment is comfortable for the child and, as osteopaths treat the whole body, treatment can also improve the function of the rib cage, neck and shoulders which supports the child’s growth and assists teething problems.

Studies have shown osteopathic management of recurrent ear infections result in a significant decrease in reoccurrence of infection, and subsequently less need for frequent antibiotic use and/or surgery.5,6

MyBaba is a website blog that parents often mention to us at Kane and Ross. It carries articles from experts in their field and when Simone was asked to contribute she decided to write about Infantile Colic and Osteopathy. Colic is by far one of the most common and distressing problems for a new mother to have to manage and Simone feels that it’s important for parents to know more about the causes and treatment options available.

You can read her article here:

Babies are often born with sticky eyes, either due to a blocked tear duct or compression around this area during delivery.

Directly after the birth you may notice the eyes and the area around the bridge of the nose looking puffy. 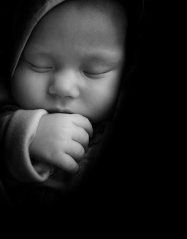 What can an osteopath do?

Some babies may sleep for only short periods and may sleep very little during the day or the night whilst others may wake at the slightest noise or want to be held all the time.

These babies may have tension on the bony membranous tissue surrounding their skull, keeping their nervous system in an alert state and making it difficult for them to relax and go into a deep sleep.

An osteopath can help to release the tensions in you baby’s body, helping it to relax.

Baby’s nasal areas are very small and narrow. If any mucous is present in the area it is difficult to drain away.

Lack of drainage can disturb or prevent your baby from sleeping as well as causing them to breathe noisily when they are asleep.

A congested nose can reduce their ability to suck, which can result in wind in their tummies.

Babies born via C-sections tend typically have a lot of mucous build up, as their chests have not been compressed through the vaginal canal, and it is good to seek treatment to prevent mucous retention.

Saline drops or suction from the baby’s nose may help.

Osteopathy can release tension in the mid face and chest to allow mucous drainage to occur.

Check our colic section for information and advice regarding wind in your baby’s tummy.

Colic is a broad term used for abdominal pain and effects up to 40% of babies. The main symptom is excessive crying in a baby who is healthy and well fed.

The five main reasons for colic are…

Osteopathic treatment can help your baby pass wind more easily, release tension around the diaphragm to reduce the symptoms of reflux and specialised techniques to the bowels may help with constipation.

If your baby cannot open its mouth well to feed, has a poor latch or is gulping an osteopath can release any compression at the base of the skull and jaw to improve latching. This has added benefit for you as it will help to reduce cracked nipples and improve the baby’s food intake.

What can you do to help your baby?

*Hayden C. & Mullinger B. (2006) A preliminary assessment of the impact of cranial osteopathy for the relief of infantile colic. Complementary therapies in clinic practice. May 12(2), pp83-90.

Having a baby that takes a long time to feed and leaves little time between feeds can leave you feeling tired and isolated.

Your baby may be a ‘windy’ feeder, tongue-tied or unable to suck efficiently. Feeding is a complex task and can be difficult and tiring due to mechanical stresses through the head, face, jaw and throat. Also, the nerves to the tongue and face muscles may have been irritated either inter-uterine or during birth, making sucking difficult.

One of the most important parts of breastfeeding is having your baby latched on correctly. Babies are born knowing how to latch on and suckle correctly, but with more than 40 muscles to control the lips, tongue, jaw, cheeks and soft palate; anything affecting these will have an impact on how well your baby will feed.

Compression of the back of the head or jaw during birth or from the use of forceps may affect the nerves or muscles to the tongue and mouth causing difficulty with latching or sucking.

What to look out for during feeding:

To prevent feeding difficulties and to avoid frustration, these problems should be addressed as soon as possible; it is ideal to see an osteopath before your baby is a week old.

Osteopathic treatment will usually focus on the back of the head, neck, jaw and hyoid bone.

You can also get the advice of a lactation consultant at this time and take a look at our feeding posture post to make sure you are relaxed whilst your baby is feeding.